One of the justifications I used to talk myself into buying the Sous Vide Supreme was that it would replace my crock pot. Now those who know me are aware that it is my intention, in just a little more than two years (781 days, but who’s counting), to move to New York City. So this rationale is no matter of little importance. I am going to have to fit a s#%tload of rooms worth of all my important stuff into a shoe box apartment in order to become happily ensconced in the Big Apple. Thus, until such time arrives, I have come up with a rule to live by: anything new which is brought into the house must give rise to the throwing or giving away of something of equal or greater volume. The crock pot, while being shorter than the SVS, definitely has a bigger footprint, i.e. takes up more space in a closet or cabinet.

I have one friend who has an SVS and when he heard this, he said “nooooo, the SVS will not replace the crock pot.” I took that as a challenge. Actually, my friend should have asked me just what I do with the crock pot. All I do with the crock pot is (1) make soup, and (2) make pulled pork. Try though I might, I have never found anything else to do with this appliance that can’t, just as well, be done on top of the stove.

“Slow cooker” you say? Oh no, that is just not so. The darn thing simmers the bejeebers out of everything. I can braise just fine in the oven and I can cook soup on the top of the range, thank you very much. But for pulled pork…well I bought the SVS and so it was time to put up or shut up.

Lets just say that something magical happens to a fatty chunk of pork shoulder or boston butt when it goes into the crock pot for 6 or 8 hours. Even my darling, adolescent, loving, sweet, wonderful, adorable brat of a  step-daughter asks for this dish regularly. Rubbed with a beautiful spice mix I have developed (mild chili powder, cumin, smoked paprika, ground mustard seed, granulated garlic & onion, ground coriander seed, and salt) this relatively cheap cut of meat becomes an intensely flavorful pile of porky deliciousness that my family adores. Most often, we stuff it into fresh tortillas with refried beans, spanish style rice, sauteed veggies and other favorite condiments. I call it our “make your own fajitas” meal. 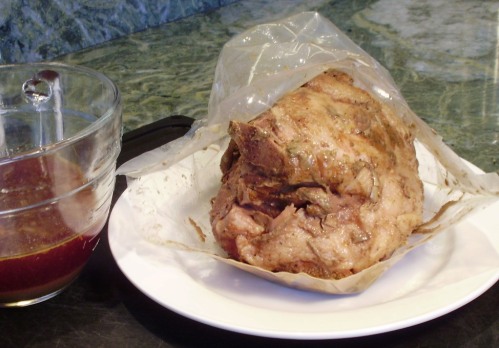 So I had to prove to myself that pulled pork would make the grade coming out of the SVS. For this experiment, I just happened to have a beautiful chunk of Red Wattle in my freezer, perfect for the main ingredient in our fajita fest. I thawed that chubby chunk-o-piggy out and rubbed my spice mix all over the surface of the roast with abandon before bagging it up with my Food Saver. Many sous vide recipes talk about how you have to use a little restraint with spices when cooking by this method but I have found this applies to only a limited range of items. This includes some herbs, especially bay and rosemary, and garlic (which I am, alas, unable to eat much of anyway). I was not worried about overdoing my pork rub. I set the water oven on 60C (140F) and put the sealed up meat in to cook for 48 hours! 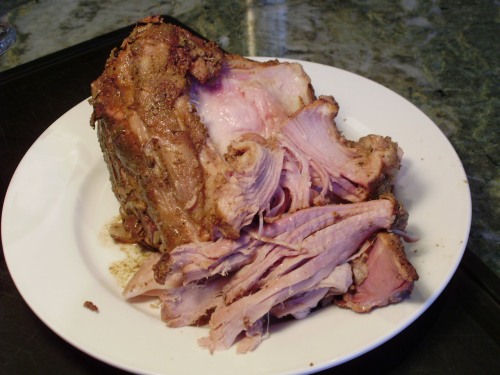 The results were, if I may say, award winning. Better than out of the crock pot, by far, the pork was tender, exceptionally moist, just the right doneness and orgasmically flavorful. There was not a trace of dryness as is often the case with the slow cooker. The meat pulled away from the fat very easily so that in the end we were left with a much more low calorie version of our old crock pot standard. The spice rub gave the meat a wonderful, smokey, complex flavor that was exactly what we had come to love. One interesting thing is that we poured a couple of cups of spicy meat juice out of the cooking pouch. I froze this wonderful liquid figuring that it will make a delicious sauce for a chop or tenderloin in the future.